In the fourth quarter of 2021, the students were asked to listen to 3 further fables and write an essay to share their thoughts and observations as well as their own personal "lessons learned". 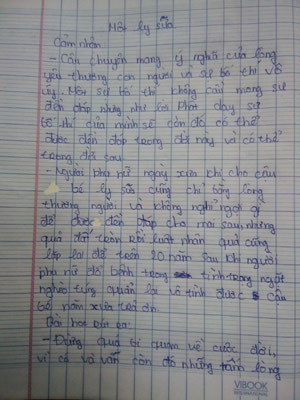 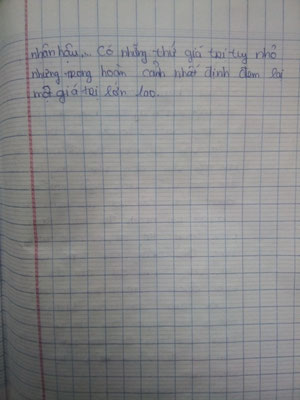 The story carries the meaning of human love and the concept of helping people attain their fearless state of mind - an act of giving that specifically helps to remove the worries or fear of others by one's efforts.

According to the Buddha’s teaching, any act of kindness without expecting anything in return will always be repaid, either in this lifetime or the next. In the past, when the woman gave the boy a glass of milk when he was hungry, it was out of her compassion and she did not expect anything in return.. Twenty years later, the Karma principle repeats itself with its  law of cause and effect. When the woman was sick and in a state of dire straits, that same boy, now grown up, came to her rescue.

The lesson that I have learned from this story is not to be too pessimistic in life. There are and will always be many kind hearts that exist in our life. Furthermore, in certain circumstances, an act of kindness, however small, can make a big difference in someone’s life.

"A glass of milk" is a true story. The woman's kind act helped a young boy strived harder throughout his life to become a world-renowned doctor – Dr. Howard Kelly.
Bao Thi’s mini-essay has earned a special recognition prize because of her in-depth understanding about kindness and almsgiving.
Bao Thi did not perceive the glass of milk the woman handed to the boy as a "gift", or “an almsgiving of material goods” because the boy asked the woman how much money he owed her and wanted to repay some of its value with the only dime he had. Entering the store, he intended not to beg for food but to use his only dime to buy some drinking water to help ease his extreme hunger and exhaustion. Bao Thi considers the woman’s act of kindness as “The almsgiving of fearlessness” or “the offering that helps people attain a sense of safety to ease their suffering” because as the boy left the store, he has a better outlook of life and his faith in people’s kindness is also deeper and stronger. That faith helped him overcome adversaries in life and he became a compassionate and world-renowned medical doctor.

There are 3 forms of almsgiving or offerings in Buddhism:
1. Offerings of goods - Donating material goods or money.
2. Offerings of the Dharma or Buddha's doctrine - spreading the Buddha’s teachings to others
3. Offerings of fearlessness and strengthening the mind - helping people attain their fearless state of mind, attain a sense of safety to ease their suffering, and cope with their life adversities.

Doing whatever you possibly can to protect people in danger or being treated unjustly and to remove their fear – that is “The offering of fearlessness and strengthing  the mind”.
"Unforgettable Gratitude is a deep appreciation that occurs the most when one receives the help while being feared, surrendered and suppressed."
Not only the brave, talented, or powerful people can practice “The giving of fearlessness” There are plenty of opportunities for us to apply this practice of giving, such as helping a fearful child being chased by a dog, or helping an old lady being afraid to cross the street.
The woman's answer that she expects nothing back from the boy after buying him a glass of milk has given the poor boy a strong faith in human kindness, which helped him strive to become a talented and compassionate doctor.